Physical Details: Hair is lengthy (at the moment, can be changed per owners request) and usually held back out of his face in a ponytail. His eyes are reptilian. His upright half usually hovers around 6 feet tall, leaving the rest to trail behind him. His colors shift depending on what environment he is being kept in, and the quality of his food affects vibrancy, but he cannot simply be 'any color,' no, rather, he had specified 'morphs' that he shifts into, one of four; it takes him around 2 to 3 days to completely shift his colors and he cannot do it at will. Rumor is that he can also change color based on mood and hormones, such as during severe depression or when exposed to a female in heat, but he has never seen this happen.

Physical Markings: Tiger like stripes cover the majority of his tail and up his spine.

Physical Defenses: Just his speed, Kaizen is not really a fighter and can easily be overpowered when caught off guard. He does have some nasty teeth, but he only really uses those for eating.

Appealing Attributes: His colors are often vibrant and striking no matter what color shift he's currently in, and he moves with a serpentine grace and allure. Also, he isn't too bad on the eyes, for anyone who's looking, with a decent built chest and handsome features.

Other Items: (Remember slaves cannot have belongings let alone have them on them, they may be made available when rented / purchased.)
There is a jeweling kit that he owns, as well as carving tools included with it that he uses for his jewelry work. He also has a set of jewelry that he was wearing when he was first brought in, as well as two ornate scimitars used in the arena.

Phobias: None to speak of, yet.

How do they present themselves: Well mannered, trained, but gentle and warm. Unusually cordial for a gladiator slave.

Feelings towards being owned / rented: He prefers to be owned. It gives him a goal.

Overall Attitude: Casual, he tends to mirror the feelings and attitudes of those around him, depending on what makes them comfortable.

Quirks: Sometimes he shifts his jaw around- it's unnatural because, despite having a human face, his jaw in fact can unhinge, and separate at the chin, allowing him to eat much larger food. The skin here stretches, and even becomes vaguely translucent. He will only 'adjust' his jaw if he is nervous or upset, similar to someone grinding their teeth.

Hobbies / Interests: He enjoys crafting jewelry and small carvings from bone or rock, its a pass time that has made him money, and seems to sooth his mind. He also enjoys caring for fishes and corals, though he hasn't been able to do so since he was moved away from the coast and brought into slavery. He has also come to enjoy fighting in the arena.

High or Low Maintenance: Moderate. He can easily be pampered, or made to pamper someone, but if his owner has no time nor care, he can more or less take care of himself. He prefers to bathe or soak at least once every three dais for basic hygiene and skin/scale health, but it will not harm him if he goes a little longer.

Language(s) Spoken: Common English and Naga, fluent in both.

Can they Read / Write: He can write in both.

Can your character produce magic: No.

For Rent or to Own:
Rent to own, three rentals minimum please.

What are you looking for in a slave / slaver Roleplay:
Someone with a firm hand, who is dominant, male or female, who can make use of his skills as well as train him in other things. I would like for Kaizen to be made a little more hardened/vicious/angry, but still be loyal to his owner, positive relationship, possibly masochistic. No whisper Rps, prefer not to fade, someone who is around frequently, TGT RP primarily.

What are your allowances for your character:
No permanent mutilation or death. Some mental changes are ok.

Character Description:
> Skin and scale swam seamlessly, sentient humanity shared with serpentine elegance in a seductive spectacle of strength and sinew. His subtle smile shielded the shocking back-slanted fangs of a slithering predator whilst eyes swindled and stunned the spectators with striking spectrum. Charm stuttered out shoddily, secrets and suggestion, such that deception was surely not soldier's strongest skill, despite scorned split tongue. Spectacular shades of his shape shifted not by selection but by sequence, submissive to situation, suiting him to his state. Silhouette boasted sharp and stately features and hair sat short, stunted sides nearly shaven in the selected style. Sensual male specimen was swathed in sufficient attire for a snake, shiny structures of stone and solder that strung across his surface, sported smugly, scoring scrutiny from the selfish. Shackled to neck a scintillating and seemly collar served to sponsor his status: serf, servant, certainly no sir. By this collar he was enslaved to a superior. By this collar, he surrendered his soul. 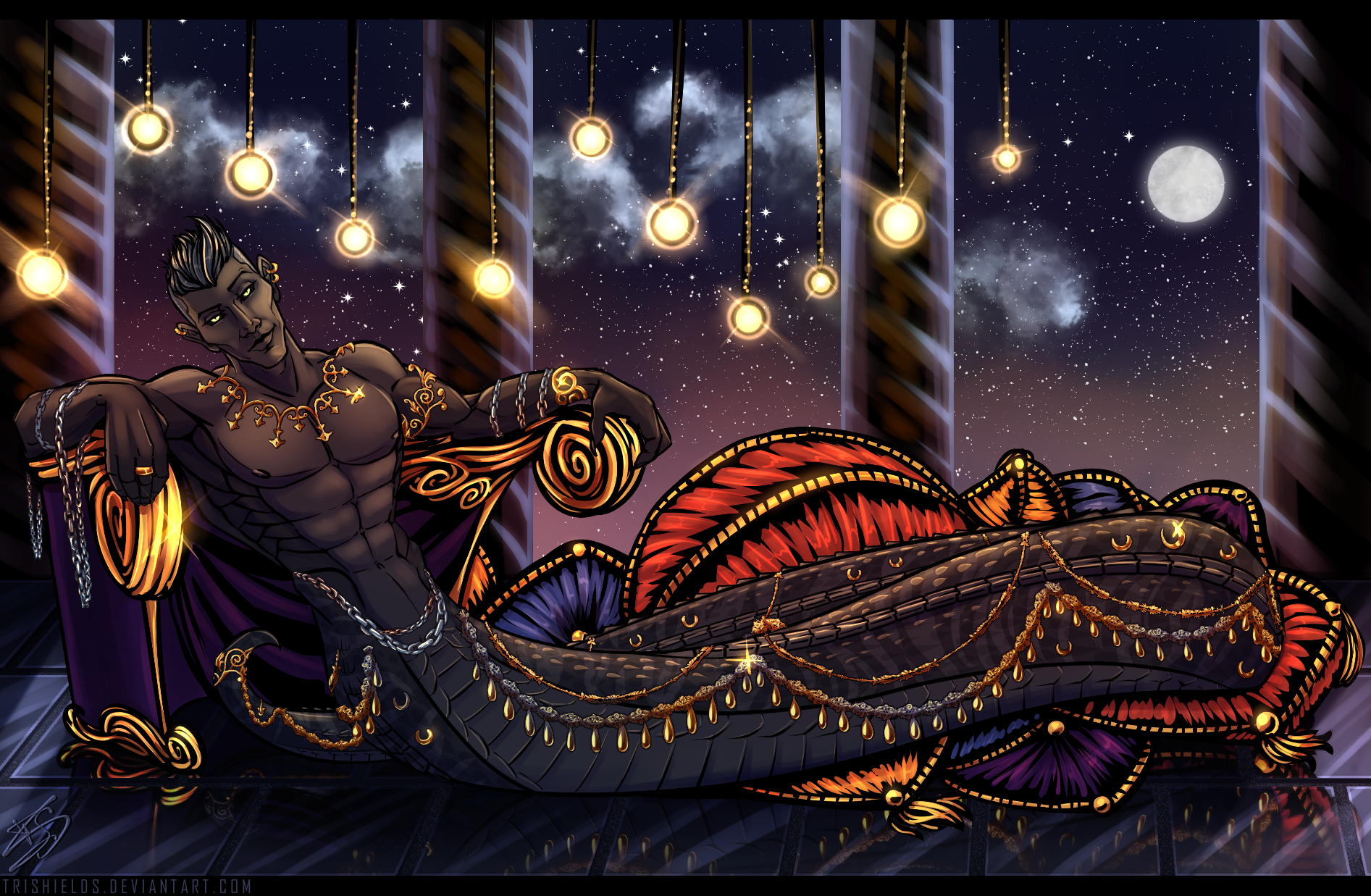 Notes:
No gross kinks please, read his site fully.
Last edited by Kaizen on Tue Apr 07, 2020 4:03 pm, edited 10 times in total.
I don't know why, but it seems like Nero's foot and a half long discounted sausage gets into everything these days. Hm.
Top

Re: Schaden Thaludian - Rent to Own

Schaden has been granted access to the gladiator tack room to train with a guard escort watching him. He will be taken out of the cages periodically to train with Master Grimm. He has shown great potential in the arena and will be trained to hone such. However, if he is caught misbehaving or otherwise breaking the rules it is advised to inform Master Grimm of such a situation so he might detemine whether or not Schaden is still eligible for such a privilege.

His hands would plait the priest's guts if he had no rope to strangle kings.
Top

Re: Schaden Thaludian - Rent to Own

Schaden has been returned to the Tether and is once more up for rental/purchase.
I don't know why, but it seems like Nero's foot and a half long discounted sausage gets into everything these days. Hm.
Top

Schaden has been purchased by Gladiator Monstrum. Available for rent only.
I don't know why, but it seems like Nero's foot and a half long discounted sausage gets into everything these days. Hm.
Top

After many months of being owned by Chakra (sold to her by Monstrum), Schaden has been made unowned again due to her disappearance.
I don't know why, but it seems like Nero's foot and a half long discounted sausage gets into everything these days. Hm.
Top

wrote:
Though unowned, Kaizen is under the employ of The Pit, resulting in his taking part in missions that require his presence off of the island. During this time he will be under my rental, and any reward he may receive from his missions will be split fifty percent to myself and fifty percent to the Tether until such a time he is purchased. Discussions will then be had with his owner as to whether or not he may continue his employment at the guild.

His hands would plait the priest's guts if he had no rope to strangle kings.
Top

Kaizen is once again available for purchase.
I don't know why, but it seems like Nero's foot and a half long discounted sausage gets into everything these days. Hm.
Top
Post Reply
7 posts • Page 1 of 1