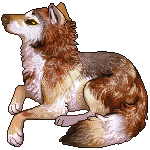 Physical Details: Golden eyes. Various shades of brown, most notable marking is a light brown one across her face. Occassionally has long, curly brown hair.

Feral or Cultured: Somewhere in between. This slave was feral and later gained the ability to shapeshift, she has much to learn about the world and our customs.

How do they present themselves: She keeps herself clean according the rules of the Tether, occasionally requires reminding of what is standard here - this seems to be a side effect of her feral upbringing. Otherwise she is eager to please, shows great interest in whoever she is interacting with, and generally entertaining if you are looking for one to amuse you with conversation and dance.

Feelings towards being owned / rented: Indifferent, it's uncertain if she fully understands what either of these things mean.

Quirks: Unfamiliar with the customs of the cultured world. Overzealous and a bit unaware of her surroundings.

Can they Read / Write: Minimally.

Can your character produce magic: She can shapeshift between feral and two-legged forms. It doesn't appear she can take any other forms.

For Rent or to Own: For Rent.

What are you looking for in a slave / slaver Roleplay: For patrons, anyone looking for some lively company and entertainment. For a potention owner, someone harsh and abusive to contrast Galleta's disposition, though who has some sort of redeeming quality for her to latch on to.

What are your allowances for your character: My limit is death/dimemberment.

Long Term/Short Term: Both, either.

Character Description: An exceptionally small wolf, petite in stature and weight, with twiggy limbs and equally dainty paws and features. The only exception to her delicate visage are oversized ears pinned to a small head, a trait not atypical in her breed, but exaggerated in this particular specimen. Such a slim build lends itself to agility and not much else, her prowess for such is exemplified in her exceptionally fluid, if a bit erratic, pattern of movement. Fur is an intricate mixture of earthy hues, varying shades of brown with undertones varying from warm to cool depending on the lighting and her mood. Most of her fur is silky and form hugging, thin to accommodate the Southern climate for which she was intended, though her underside is notably more plush. When she manages to keep herself adequately fed her pelt is striking and vibrant. Golden eyes shine from a sharp featured face, bright and inviting.